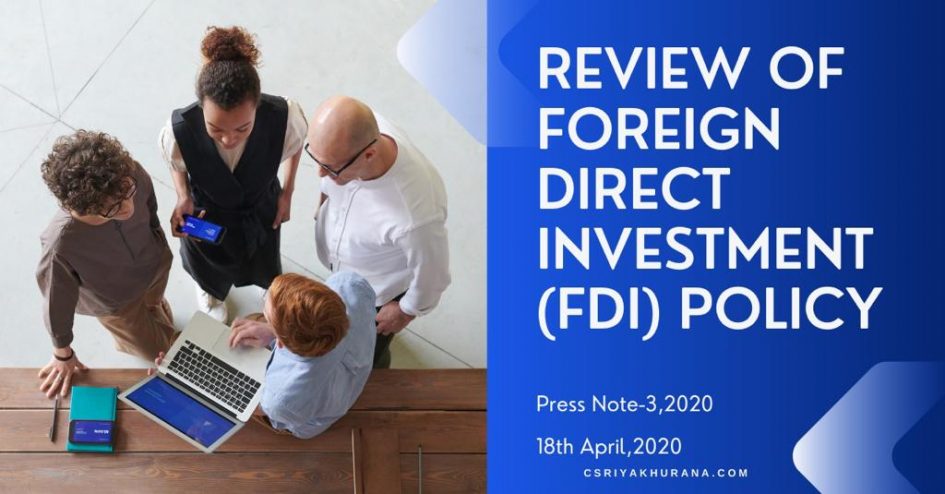 As on 18th April, 2020, The Government of India has made some changes in its FDI Policy, w.e.f the notification Government has made mandatory to take its prior approval before making any FDI in India, from countries that are sharing land border with India

Accordingly, if any neighboring countries that are sharing Land Border of India, want to invest in India, including China has to take prior approval of the Government of India before making any Foreign Direct Investment in India. Its seen primarily as a way to curb the Chinese Investments in India due to the current pandemic, COVID-19.

The Ministry of Commerce and Industry has made the following change in Para 3.1.1(1) of the Consolidated FDI Policy, 2017.

Para. 3.1.1 (a) A non-resident entity can invest in India, subject to the FDI Policy except in those sectors/activities which are prohibited. However, an entity of a country, which shares a land borders with India or where the beneficial owner of investment into India is situated in or is a citizen of any such country, can invest only under the Government route. Further, a citizen of Pakistan or an entity incorporated in Pakistan can invest, only under the Government route, in sectors/activities other than Defence, space, atomic energy, and sectors/activities prohibited for foreign investment.

Reason to take this step

This step is taken by the Government due to raising a stake of the Chinese Central Bank, in Housing Development Finance Corporation Ltd, (HDFC), in the home lender from 0.8% to 1.01% in the Quarter of March, through open market purchases.

This primary intends to attempts by the Chinese firms to take control over the Indian firms, who have been affected and weekend due to COVID-19 lockdowns.

In the coming days, this decision might have massive ramifications on the India –China Trade Ties.

Disclaimer: This disclaimer informs that the views, thoughts and opinions expressed are solely to the author of this Article and not do not represent the opinions of any other, whatsoever with which I have been, am now, or will be affiliated

Theme by Anders Noren — Up ↑